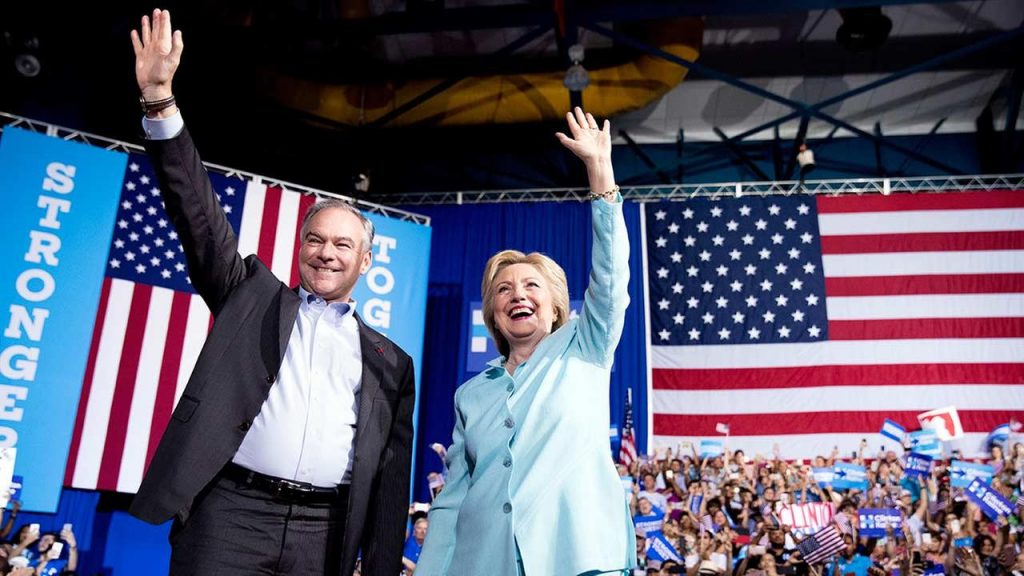 On July 22 Hillary Clinton announced Tim Kaine as her running mate. Kaine is a Democrat senator from Virginia who supports a ban on 15-round “clips” and “assault weapons,” and who wants to enact a law to hold gun dealers liable for the misuse of firearms.

During the June 26 airing of Meet the Press, Kaine told Chuck Todd that he voted for an “assault weapons” ban before and “would likely vote for it again.” But he stressed that he believes “limitations on the size of magazines and ammunition clips” is the first step to take.

Todd asked Kaine if he believes the sale of AR-15 rifles ought to be illegal, and Kaine offered no direct answer. Instead, he suggested the problem with banning certain rifles is that the ban can be circumvented. Kaine said:

On September 8, 2015, just two weeks after Vester Lee Flanagan used a legally purchased firearm to kill news reporter Alison Parker on air, Kaine put forward a bill to hold licensed gun dealers liable for the misuse of firearms. The bill was designed to “raise the bar” and require more “accountability” on the part of gun sellers. The Roanoke Times reported that Kaine’s bill “would make gun sellers criminally liable for a bad sale if they didn’t take reasonable, affirmative steps to determine the customer met federal criteria.”

Consider the scenario—Flanagan passed a federal background check for his gun. He passed the very same check that Hillary Clinton, Gabby Giffords, and others assure us will reduce crime and/or make us safer. But after passing the check and acquiring the gun, Flanagan carried out an evil deed. Background checks will never stop a latent criminal from getting a gun; they only stop actual criminals.

Yet, even though the law was followed regarding Flanagan—a federal background check completed and passed—Kaine’s response was to push for more liability on the licensed gun dealer. In other words, he wants the gun dealer held responsible for what a buyer does after exiting the store with a firearm the FBI allowed him to purchase.

This is Hillary Clinton’s running mate.

On Tuesday, NRA-ILA Executive Director Chris W. Cox addressed the Republican National Convention about the grave threat to the Second Amendment posed by a Hillary Clinton presidency. On Wednesday, Clinton’s attack dogs were out in force, desperately trying to discredit the case Mr. Cox methodically built against her.

But Clinton’s campaign knows that the truth is to her presidential aspirations like oil is to water. Clinton’s political apparatus is therefore largely devoted to obscuring her record, her views, and her true agenda. No wonder recent polls have revealed that 2 out of 3 Americans find Clinton neither honest nor trustworthy.

And so it comes as no surprise that as Clinton pivots away from the primaries to a national campaign to bamboozle the broader American public, her apologists and spin-doctors are furiously downplaying Clinton’s extreme views on gun control. One website – ironically called Correct the Record, claimed that Clinton’s threat to the Second Amendment is “a lie that Republicans love” and one that has been “completely debunked.”

But Chris Cox could not have said it more clearly or accurately: Your continued right to protect yourself and your family with a firearm in your own home is on the ballot in November.

As Mr. Cox indicated, the Supreme Court ruled by a 5-4 margin in 2008’s landmark Heller case that the Second Amendment does indeed protect an individual’s right to keep and bear firearms for self-defense.

And no matter what Hillary Clinton’s surrogates now claim, Hillary’s own view of Heller came straight out of her own mouth while she was talking to the one group of people she lies to the least: her upper-class donors. As leaked audio later revealed, Clinton told the audience at a private fundraiser in New York last October that “the Supreme Court is wrong on the Second Amendment. And I’m going to make that case every chance I get.”